Okay, maybe these are not better than sex, but you know what? They are so effing good, and are free of the things that cause diabetes and obesity–namely sugar and grains. Made with stevia, cashew flour, and stevia sweetened chocolate chips, you have no excuses not to indulge in these lovely bars. I made them in a heart shaped baking pan for Valentine’s day, but you can use whatever baking dish you have. And now…the recipe. (This recipe was inspired by a recipe in the book, “Everyday Grain Free Baking” by Kelly Smith. I modified the original recipe a bit to exchange the honey for the stevia syrup and change the almond flour to cashew flour.) 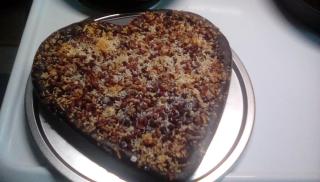 Preheat oven to 340 degrees. Grease a baking dish. Then, prepare the cookie layer. Mix together dry ingredients in a small bowl. In a larger bowl, beat together coconut oil, stevia syrup, egg, and vanilla until creamy. Add the dry ingredients, and mix well. Fold in chocolate chips. Spread mixture on the bottom of the baking dish; then set aside while preparing the brownie layer.

For the brownie layer, mix together the dry ingredients in a small bowl. Then, combine coconut oil, stevia syrup and chocolate chips in a small saucepan. Heat on low until melted. In a larger bowl, beat eggs and vanilla with a hand mixer until light yellow and creamy. Slowly add chocolate mixture, a little at a time to prevent the eggs from cooking, until the chocolate mix is completely incorporated. Add in dry ingredients and mix well. Spread over cookie layer evenly. If desired, sprinkle additional chocolate chips, walnuts, and coconut over the top.

Bake for 30 minutes. To test for doneness, insert a toothpick into the center. If it comes out with crumbs, it is done. Let cool, then cut and serve.